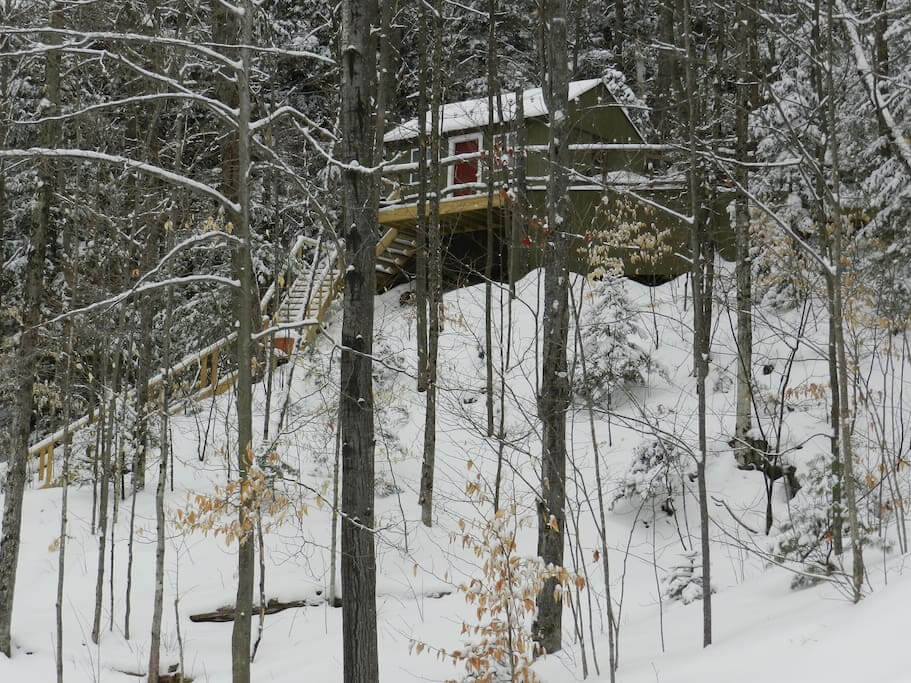 Summer ends early in the North Country of New Hampshire. The months of blowing snow and bitter cold during my first winter didn’t deter me, but, when the temperature in the Potato Cellar began to drop for the winter on August 15th, I really thought that was unfair.

I’d spent my first summer at Ski Hearth Farm living in an A-frame cabin way out on the road to Lisbon. From Franconia you drove a few miles up Sugar Hill and turned left towards Pear Lake. I shared the place with a couple of friends. We didn’t have any neighbors within a ½ mile, but if you walked around the lake a bit you came to a dairy farm that sold raw milk, fresh from the herd, as long as you brought your own gallon jar.

The place suited me well, and it was perfect for three of us, but now that winter was coming Tim was heading back to Jersey, and I figured it was time to live on my own. At that point I had a Chevy Corvair, which despite being “Unsafe at any speed…” was reliable transportation. I wanted a place tucked in the woods and small enough that I could afford on my own.

What I found was a one room log cabin. It wasn’t a kit, it wasn’t that nice. It was a building about 16 x 8 feet whose walls were laid from 8 inch pine logs that had been rough milled with a chainsaw. There was running water in the kitchen sink, but it wasn’t potable. There was an outhouse out back about 20 feet. There was even a fridge, as it turned out, this proved most useful for keeping my milk from freezing solid during winter nights.

When I moved in there was already a couple of feet of snow on the ground, so, I would walk from the dirt turnout where I parked along Highway 18 up a narrow path a couple of hundred yards into the woods. One benefit of North Country winters, the deep snow completely masks even the most unkempt property, and hides abandoned cars and old appliances that may be lying around.

This wasn’t the most beautiful place in the town, but it was home.

Every day or so, I would strap on my LL Bean wicker backpack, fill it with five or six empty milk jugs, and walk down the road about half a mile to a spring where I would fill the jugs for drinking water.

In my mind, this tiny cabin was separated into 3 living areas. There was the 8 x 8 kitchen, and 8 x 8 “living room” and a loft bedroom the same size as the living room below. The ceiling of the living area was about 2 inches lower than my head, if I stood up straight, but it didn’t really matter, as it was too cold all winter to spend any time in that half of the cabin. My days were spent at work, my evenings were spent, either reading in bed, or carousing at a local bar, and of course, with night starting around 4 in the afternoon, a good deal of my time was spent sleeping in my sleeping bag under several blankets.

Most mornings I would walk down the hill to my car. I would start it up then brush off, or shovel out, the snow that had accumulated since the day before. Then I would creep down the hill with my bald tires to Ski Hearth Farm. If I was lucky, we’d spend the morning grading potatoes. Throughout the year the cellar temperature ranged from a high of 42 to a low of 38, so it was often 50 degrees colder than outside.

There were just two of us working the farm in the off season. Jim and me. So grading potatoes was a four man job with the two of us dancing between two jobs each. First he would bring over a crate holding a ton of potatoes on the forklift. I would put a couple of sacks that held fifty pound at one end of the grader, then we would take turns filling the potato hopper at one end. Jim would scan the potatoes as they rolled by on the conveyor, leaving the best to drop into the “Number One” bags then pulling the potatoes with cut marks or misshapen spuds to the “Number Two” bags. Everything else was tossed into a wooden box “culls” and fed to the cattle.

When one fifty pound sack was full it was my job to tie up the top with a heavy metal twisty using a small tool whose free-spinning handle made the job possible. These sacks would be stacked on a palette, and a new sack put in its place at the end of the grader.

We would spend an hour or two each morning sorting spuds. The noise of the grader precluded conversation, but, we could put on music, usually Dylan’s Desire or Marley’s Exodus, for entertainment.

Once this task was done, it was time to bundle up and face the frigid are outside.

Category: Working
About This Site